You are here: Home1 / Transportation2 / UMKC turns on the juice for recycling

Chances are, Thomas Edison would’ve flashed his bulb at the University of Missouri-Kansas City’s choice of a truck to pick up recycling materials and deliver building supplies.

It’s a Newton, made by Smith Electric Vehicles.

UMKC put the truck into service in December 2010, with help from a Clean Cities grant of $111,000 from the U.S. Department of Energy (DOE). The money UMKC received was part of a $15 million Clean Cities grant awarded in December 2009. The overall grant also benefited several municipalities and companies in the Kansas City area and elsewhere that had implemented alternative-fuel projects. The grant was administered by Kansas City-based Metropolitan Energy Center (MEC) through a contract with the DOE. All the projects supported by the grant constitute MEC’s Midwest Region Alternative Fuels Project.

The UMKC project’s overall cost was $157,000, which included the electric truck and one electric-vehicle charging station on the university’s campus for public use. UMKC matched the Clean Cities grant with about $46,000 of its own money, says Henry Marsh, UMKC’s fleet manager. The public charging station went into service in April 2011. UMKC has since added three others.

“We wanted to start an electric infrastructure for people to charge their cars,” Marsh says.

UMKC puts an average of about 4,500 miles a year on its service vehicles, mostly with stop-and-go driving. The Newton, which replaced a gasoline-fueled truck, has displaced about 900 gallons of gas a year since UMKC put it into service.

“An electric truck is perfect for this kind of driving,” UMKC said in its final report to the DOE. The truck does not require any warm up to be efficient.”

Marsh says he’d been familiar with electric trucks when he attended an alternative-fuels conference.

“I saw an electric truck on display and I thought this would be a perfect application for our purposes,” he says.

The Newton’s drivers think of it as “a new toy,” Marsh says. Their only complaint has been that it’s too slow going up hills when fully loaded, but it gets the job done even then, he says.

Marsh has gotten calls from two universities in other states with questions about the Newton and how it’s been working out for UMKC.

“According to Smith Electric, we were the first university in the nation to buy one of their electric vehicles,” he says.

His advice to those thinking of buying an electric vehicle is, first, consider carefully how it will be used, and make sure its capabilities match the intended use. The truck is expensive, he says, “and if we had to buy that truck outright, the monetary payback would’ve been hard to justify.”

“There are fleets that are a lot bigger than ours, and they can see and measure a payback on it,” Marsh says.

That money savings, which takes time to achieve, plus the sustainability issue and the evolving electric technology itself will drive increased use of electric vehicles, he says. 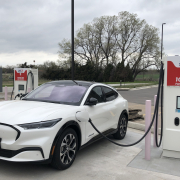 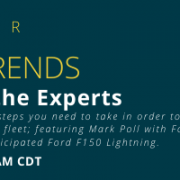