How It All Started

Between 1904 and 1914, the William Rockhill Nelson estate built a row of elegant single-family homes on the south side of 47th Street between Rockhill and Troost. A century later, in 2011, the Metropolitan Energy Council (MEC) retrofitted one of these homes to demonstrate residential energy conservation; they called it Project Living Proof (PLP). Both inside and out, PLP was designed to show the way to greener urban living. The landscaping included raised vegetable beds and fruit trees to nourish human residents and native trees, perennials and shrubs to support a healthy population of birds and insects. 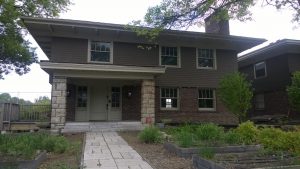 Master Gardeners of Greater Kansas City (MGGKC) provided volunteers, who were the hands-in-the dirt component of this project from 2011 through 2013.   Gardening stopped abruptly in 2014 when a water pipe rupture (nearby construction broke our clay pipe inlet) cut off the water supply to the house. When water service was restored, MG volunteers returned to find a case study in deferred garden maintenance. Sweet coneflower (Rudbeckia submentosa), goldenrod (Solidago speciosa) and false aster (Boltonia asteroides), overwhelmed all the sunny native beds. Purple poppy mallow grew down the retaining walls on the home’s east side and into the beds below.  Some sun loving natives remained politely in their spaces: rattlesnake master, false indigo, tussock sedge, Joe Pye weed and purple coneflower. In the shady beds of the home’s front yard, celandine poppy and spiderwort leap-frogged over the neighboring ginger, goats beard, Solomon seal and columbine. Arugula naturalized in one of the front yard’s sunny raised beds, keeping company with an impressive stand of common milkweed. Bindweed and vining milkweed covered the Virginia sweet spire with choking garlands.

MGGKC volunteers spent most of the 2015 growing-season removing thugs and trying to figure out what had been planted and what was an interloper. We managed to grow a satisfying fall crop of greens and were grateful to plant prairie dropseed and little blue stem donated by the Platte County Land Trust.

In 2016 and 2017, we had an infusion of spectacular new volunteers from the new Master Gardener classes. At the suggestion of a 2017 class member, we asked MEC for a key to the house for access to a restroom without hiking over to the Discovery Center or a nearby business—what a relief!

In July 2017, the front yard suddenly went from shade to sun after MEC removed an ailing oak. The tree had been badly damaged when the water line was repaired. It was sad to see the old oak go, but it gave us practice potting up the shade loving natives under its canopy in advance of the removal and more practice replanting them in other shady spots when the weather cooled.

The loss of the oak also gave us a big, sunny space to try a winter cover crop to improve the soil and keep down the weeds. We finished the 2017 season planting annual winter rye in the front yard and in most of the raised beds, something that none of us had tried before.

At the beginning of the 2018, we learned a painful lesson in our experiment with the winter rye. If you cut off the seed heads too soon, the plants grow new seed heads. We cut too soon and had to cut again, a labor-intensive lesson. However, the winter rye was successful in weed prevention. The living stalks of rye crowded out spring weeds and the seedless dead stalks of rye we used as mulch smothered summer weeds.

In sunny native beds where we had removed some of the thugs, we planted eastern bluestar, compass plant, prairie beardtongue, blue sage, little bluestem, rudbeckia maxima, clove currant, prairie smoke and cardinal flower. In a shady, protected area we planted jack-in-the pulpit, Indian pink, closed gentian and starry campion. When we ran out of plants, we scattered zinnia seeds in sunny spaces to invite in the pollinators.

We practiced thinning the peaches and pears to encourage larger fruits and protect the boughs from breaking. In early September we learned to prune tomato plants, cutting off the top half of each plant to direct the plants’ energy to the larger fruit.

In mid-September, we planted natives we had purchased in the early summer as inexpensive small plugs. We grew out the plugs in gallon pots to get them well established before planting at PLP. Volunteers completed a “right plant, exercise” researching the sun/shade, soil moisture and drainage preferences for each kind of plant, based on the information at MOBOT.org. We planted 42 new plants, consisting of culvers root, pale Indian plantain, blue lobelia, coreopsis grandiflora, ironweed, cardinal flower, marsh blazing star, Mexican hat, purple coneflower, rudbeckia hirta, liatris spicata, side oats gramma, and amsonia hubrechii. At the end of September, we planted an American hazelnut, generously donated by a staff member of MEC. In mid-October, we planted 8 American beautyberry shrubs, extras from the Swope Demonstration Garden.

We finished the 2018 season, as we had the previous year, by planting a cover crop. In addition to winter rye we also planted hairy vetch for its nitrogen fixing capacity. In the perennial beds, we did not cut down the stalks of the tall native plants. The standing and falling over stalks do not make for a tidy scene; we are trying to find beauty there since the standing stalks offer winter shelter to beneficial insects.

The 2019 season saw the same dedicated volunteers with an addition of many new faces. We had great success with tomatoes, and okra planted in the western front garden. We learned that vetch is a persistent cover crop that keeps on giving. Our zinnias and cosmos looked fantastic in the raised beds and the pepper and eggplants produced until frost.

The old peach tree in the western front garden succumbed to peach borer and we cut it down. On October 29th a group of PLP volunteers along with three Giving Grove members planted our new front orchard with three Jujube trees and two bush cherries. It is a great addition to the garden.

Currently we have a list of 50 MGGKC members that help with the PLP house.  Each week we average 8 gardeners at our Sunday morning workday that each put in 2 hours of volunteering.  16 hours per week for 24 weeks!  It is a dedicated group.

This report was researched and written by Kathy Hoggard through the 2018 growing year.