You are here: Home1 / Clean Cities2 / State of Flux: Cars, COVID and the American Economy 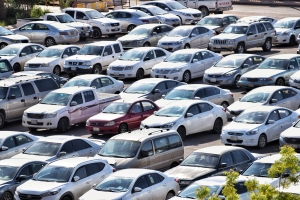 It’s been one hell of a couple of months for the automobile industry.  On April 24th, a transport containing 2,000 brand-new Nissans was instructed to drop anchor off the port of Long Beach and wait, which it did.  For a week.  There was simply no place to put the cars it carried.  In nearby Ventura County, auto logistics firms are storing unsold units in parking lots at local colleges, a Navy base and a cold-storage center.  As one port director noted, “You can’t stack cars.”

It’s been heavy going for the new-car business for a while.  Nearly a year ago, auto analysts IHS Markit noted that Americans, on average, were keeping their cars for 12 years.  Steady improvements in quality and durability are all to the good for consumers.  At the same time, Americans buying new cars during the first half of 2019 spent an average of over $1,100 more than just one year before as new technology added extra costs.  Taken together, these two trends were already weighing against the market well before COVID, dealer gridlock, factory closings and massive job losses materialized for real starting in March.  Now, global auto sales are projected to fall 22% during 2020, with US sales dropping an even steeper 26.6%.  We’re looking at domestic auto sales of 12.5 million vehicles for the year, the lowest annual total since 2010, when America was emerging from its last economic crunch.

There are also indications that COVID’s shock to the auto-industrial complex will endure for more than purely economic reasons.  For starters, commuting by car has collapsed under lockdowns.  Public transportation is also in free-fall.  Systems in Paris and Wuhan, where the pandemic began, have been completely shut down; transit system use in Rome and Milan has fallen 89%.  New York subway ridership is off 93%, and by early April, at least 41 Metropolitan Transit Authority employees had died of COVID, with at least 6,000 more sick or quarantined.  Meanwhile, bike lanes and closed streets are expanding from Budapest to Bogota to Kansas City, with some cities planning permanent reductions in auto traffic in favor of spokes and feet.

Given the pandemic, this was inevitable, since bicycles provide both local mobility and exercise for the house-bound.  But with the air clearing even in cities like Delhi and Beijing, this phenomenon may grow legs for other reasons.  Air pollution has been linked to as many as 4.2 million premature deaths worldwide every year, and 42,000 such deaths just in the United States.  And a preliminary study from Harvard indicates that residents of areas with higher concentrations of PM 2.5 pollution also have higher death rates from COVID.

The pandemic won’t last forever, but telecommuting is proving a viable option for many.  The economic impact of 30 million unemployment claims and counting mean that purchasing a car won’t be on the table for many Americans for years.  And along with the public health benefits of fewer cars and trucks on the road, it’s possible that people in Delhi or Los Angeles or Pittsburgh, experiencing cleaner air than they have in years, will demand more of it in the future.

Next up – a tighter focus on what automotive OEMs are doing in response to these extraordinary difficulties, and what hard times may do for alternative fuels, and cleaner, more efficient vehicles.

COVID-19 Impacts: Ethanol and Its Discontents

State of Flux 2: EV and Elsewhere in the Wake of the Pandemic
Scroll to top