The Mid-America Collaborative for Alternative fuels in partnership with ASG Renaissance developed and conducted two surveys that were formulated in order to gauge gauge baseline knowledge of alternative fuels and alternative fuel vehicles so as to better understand fleet and stakeholder audiences. The responses garnered from these surveys helped to identify key areas in which Clean Cities’ efforts both financial and otherwise should be focused. Perceptions and barriers to AFs and AFVs were very similar between the two audiences, indicating that these issues transcend subjective perceptions, and are in fact real issues hindering AF adoption. 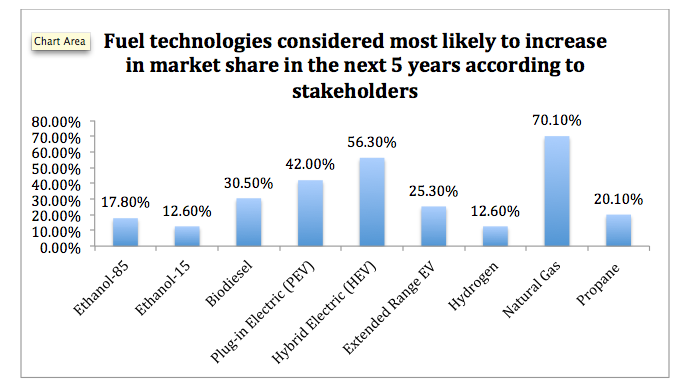 The Stakeholder Survey was formulated by MAC in order to provide insight into stakeholder perceptions of barriers to alternative fuel adoption within Region 7. Among the primary goals of this survey was to assess the knowledge and concerns of fleets, service providers, educators and policy makers who are current or longstanding members or stakeholders in Clean Cities coalitions.

Both stakeholders and fleets were asked to

Stakeholders were also asked to rank those barriers that most hinder alternative fuel adoption. From the responses gathered three major barriers were identified:

Our fleets agreed, do you? Tell us what you think the greatest barrier to AF and AFV adoption is

The Fleet Survey is a complement to the Stakeholder Survey. While the Stakeholder Survey targeted a broad audience, the fleet survey specifically targeted fleet decision-makers within the four-state area. The top two barriers regarding AF and AFV adoption were the same between the stakeholder and fleet respondents with the third being more specific to a fleet audience:

Although not part of the survey’s primary goals, the survey also highlighted the importance of geographic factors in choosing which alternative fuels and technologies will be most successful within a particular area or region.