There are plenty of popular ideas floating around about alternative energy, and about energy in general.  Many are flawed, conspiratorial or just plain wrong.  Should we call them “myths”?  After all, a myth, even though supernaturally themed or wildly imaginative, can still be valid, revealing truths about human nature.  The Odyssey or the tales of King Arthur come to mind.  On the other hand, trying to explain something about the physical world by means of imaginative story-telling is a risky proposition.  A case in point: 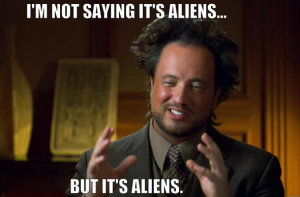 We do have a reliable system in place which does a really good job of explaining the physical world.  It’s called “science”.  Perhaps “meme” is the best name with which to tag these ideas in the age of cloud-based, cloudy online information.  So, without further ado, here’s the first in a series of takes on popular memes about energy, renewable and otherwise – and what the data say.

The Deadly Menace of Wind Turbines . . . and Cats and Buildings and Cars . . .

Wind turbines can and do kill birds and bats.  Fish and Wildlife Service estimates for the US range from 140,000 to around 500,000 birds killed per year.  Songbirds account for the most fatalities, with raptors second.  Digression – weirdly enough, it appears that the cause of death, at least for bats, isn’t being struck by blades.  Instead, scientists have discovered that barotrauma (like the bends for scuba divers) may be the specific mechanism.  Sudden, dramatic air pressure changes near blade edges are believed responsible for rupturing the lungs of bats found dead in wind farms with no other signs of injuries.  End of digression.

As in real estate, optimal wind turbine placement is all about location.  This is true for the site in general, and where you place individual wind turbines within a given facility.  The original Altamont Pass wind farm (famously featured in the 80s movie “Less Than Zero”) in California is a classic example of a bad location, and was lethal to birds.  At its peak, over 6,000 small turbines, some dating back to the 1970s, ran at high speeds birds had no chance of avoiding.  At peak turbine count, Altamont Pass was killing more than 10,000 birds every year, including more than 2,000 eagles, hawks and owls.  The good news is that after years of pressure and delays, removal of the oldest and deadliest turbines began in 2015.  A complete replacement of 569 remaining 100 kW units with just 23 modern turbines was planned for completion by 2022.  Problems are likely to persist after the repower.  Even running at slower speeds, new turbines are so tall that their blades operate at the flight height of nocturnal migratory birds.  But since upgrades and removals began at Altamont, overall bird deaths have dropped there by between 40 and 50%.

Where do wind turbines rank as a threat to wild bird populations?  Short version – very close to the bottom.  In 2018, the US Fish and Wildlife Service published its estimates for bird deaths by cause, drawn from multiple scientific studies.  Here are their low-range numbers:

Bear in mind that this total – 1,838,400,000 bird deaths – is the sum of low-range estimates (with the exception of poison).  High-range totals for the same categories produce an estimate of 3,536,700,000 annual bird kills through various human activities (and, of course, the activities of our four-footed, long-tailed furry friends).  Even high-end estimated totals of bird deaths through wind turbines (327,586) amount to a total of .0092% of total mortality in the same high-end estimate.  As wind power expansions continue, raw numbers of bird deaths will likely rise as well, but at a very low overall percentage of total mortality.

The dangers of wind turbines to birds and bats are established.  To some degree, they can be mitigated.  What about us?  For years, studies and anecdotal evidence have shown there are issues with noise from turbines.  As noted by the College of Family Physicians of Canada, turbine noise can disrupt sleep, particularly as wind speed varies.  The consensus :  these issues are real, and reduce quality of life, and the closer people live to large turbines, the worse these problems.

Others living near wind farms have reported problems including headaches, fatigue and depression.  These have been blamed on the flickering shadows produced by blades, or on infrasound – sounds too low for humans to perceive.    However, an exhaustive study by the Council of Canadian Academies, which covered peer-reviewed, unpublished, and “gray literature” found only “limited” causal links between wind turbines and sleep deprivation.  Evidence of connections to more serious issues – vertigo, heart disease, diabetes – was “insufficient”.  In addition, other reports noted the following:

People living near wind turbines who received rent from them were “less likely to report adverse health effects” than other living nearby:

To the best of our knowledge to date, the dangers to birds from wind power are real, but limited.  The dangers to people seem minimal, though noise exposure can be harmful.  And the successful uptake of a new technology doesn’t just mean the act of adopting it, but doing so carefully, with ourselves and the rest of the world in mind. 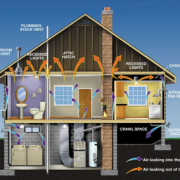 Nuclear power may be America’s most controversial source of energy.  A dam can drown a stunning stretch of river.  Coal may loom larger in climate and public health debates, given its airborne pollutants and toxins buried in coal-ash dumps dotting the nation.  Solar-thermal plants, seen as environmentally benign, can incinerate birds in mid-flight.  Using any technology has consequences, but with nuclear power, they feel more . . . consequential.  It might be origins of nuclear power in the fires of World War II.  It could be echoes of Chernobyl or Fukushima.  Whatever the reason, bring up nuclear and you may generate heat that has nothing to do with physics.

Whatever the opinions, these are the facts – 95 reactors at 57 plants in 29 states supply about 20% of America’s electricity.  As mentioned earlier in this series, nuclear plants are baseload plants.  They operate at maximum output nearly all the time, except when refueling or during maintenance.   The oldest active reactor came online in 1969, the newest in 2016 – the latter the first such in 20 years.  Two more reactors are now under construction in Georgia.  And though we’re down from 107 units operating in 2003 –upgrades and more efficient refueling mean total output is about the same as it was 17 years ago.  France remains the most nuclear-heavy country – more than 70% of its power comes from fission.  But in terms of total output, the US still leads the world.

It’s all driven by physics on a scale that’s hard to grasp.  Atoms of a few heavy, unstable elements like uranium are prone to split, or “fission”.  In the process, they release neutrons – neutral subatomic particles – and huge amounts of energy.  As those neutrons speed away, they hit other atoms.  Some of them split, releasing more neutrons and more energy.  That energy boils water, which generates steam, which turns a turbine – and so on into the grid.  Under controlled conditions, you’re in the control room of a nuclear power plant as smokeless fire converts steam to electricity.  Under uncontrolled conditions, you’re in the New Mexico desert on July 16th, 1945, as light brighter than the sun springs from the earth.

Keeping intense heat and potentially deadly radioactivity under control is an expensive, complex process.  American reactors are surrounded by massive containment domes of concrete and steel.  They’re cooled by networks of pumps and condensers backed up by multiply redundant systems in case of emergency or loss of power.  And given their fuel, they’re operated to the most exacting standards in any industry in terms of security.  All this adds up.  It’s not that nuclear power is all that expensive in terms of routine operations, fuel and maintenance.  EIA data show that between 2008 and 2018, these costs for fossil plants ranged from 3.5.to 4.1 cents per kilowatt-hour.  For hydropower, it was .9 to 1.2 cents and for nuclear, ranging from 2.1 to 2.7 cents.

What has tilted the table against nuclear projects in recent years has been costs – driven by this need for safety.  An example:  the Tennessee Valley Authority began construction on its Watts Bar plant in 1974.  By the time a second reactor was done in 2016, total costs for the project hit $12 billion.  “Abundance of caution” fits the industry’s outlook.  After the Fukushima tsunami in 2013, new flood protection measures more than 6% to the costs of  that second TVA reactor.  And in Georgia, two new units for the Vogtle plant, first priced at $14 billion in 2009, are now estimated at $25.7 billion.

Despite high capital costs, nuclear power has one huge advantage over other forms of electricity in an era confronting climate limits.  It produces power without producing CO2 or other greenhouse gases.  Obviously, building plants and parts and refining fuel consume energy and generate greenhouse gases.  But nuclear plants – with up to nearly 4 gigawatts of capacity, and operating flat-out for months on end – do so without any GHGs.  With this in mind, there’s a big effort to extend the lives of nuclear plants now in service through the USDOE with improved materials, plant upgrades and risk analysis.

There’s been a great deal of time and money invested in developing the next generation of nuclear technology.  We’re now in the fourth generation of plant designs, though none have gone beyond prototypes.  Some designs use water at very high pressure, others use helium or molten salt as coolants.  This next generation is designed to operate at higher temperatures, use much less fuel and generate way less waste.  Some new designs can use nuclear waste as fuel.  An additional important field is the development of passive safety designs – reactors that need no or minimal human intervention in emergencies.

Finally, given the high costs of nuclear, modular design is seen as the wave of the future.  Smaller, more efficient reactors could allow for deployments of this form of low-carbon power without the enormous costs seen in current projects.  Whether economic conditions and public opinion permit the deployment of this fourth generation will be one of the big climate/energy questions of the 2020s.