To the casual observer, battery-electric vehicles (BEVs) appear nestled comfortably on the upslope of a growth curve that would turn other industries green – with envy, in this case.  From a global grand total of about 20,000 EVs of all makes on the road in 2010, by 2019, the total number of plug-in hybrid (PHEV) and full electric autos on the road worldwide rose to 7.2 million.  That’s an almost a 360-fold increase in less than a decade.

The biggest surprise to date has been the number of surprises to date.  Who imagined that an automotive startup – the first such large-scale attempt since Kaiser-Frazier back in 1947 – would flat-out pound legacy OEMs in the US in any market segment?  In 2019, Tesla’s three all-electric models outsold GM’s EV/PHEV Bolt and Volt combined by nearly nine to one.  Also in 2019, the California upstart commanded more than 78% of US BEV market share.

Who imagined that battery costs would continue to collapse at the rate we’ve seen through 2019?  In 2010, battery costs per kwh averaged about $1,100 – in 2019, they hit a new low of $156.  Who imagined that price parity between EVs and conventional ICE models could arrive in some market segments by as soon as 2022, 2023, or 2025?  What year, of course, depends on whether the crystal ball you’re consulting belongs to Deloitte, Roskill or Carnegie Mellon University.

It’s this last bit – predicting the crossover– that we want to take a look at today.  Not surprisingly, it’s complicated.  Total cost of ownership for an EV can be substantially lower than for an ICE car.  With simple drive trains, EVs have fewer points of failure, and electricity is cheaper than gasoline in most industrialized nations.  Tax incentives and rebates can substantially sweeten the pot.  But in the words of a recent Automotive News article, mass EV adoption is “inevitable, yet elusive.”

Multiple factors are in play.  Infrastructure buildout is slower than it could be.  Manufacturers may increase their margins once EVs hit a tipping point, given the substantial sunk costs they’ve already incurred.  Moving the needle on consumer acceptance is still difficult.  Though we’re expecting the arrival of multiple EV models by multiple OEMs by 2023, 14 different brands didn’t offer a single EV option as recently as the end of 2018.  And there’s still a rough $6,000 – $9,000 gap between EV models and their ICE counterparts in non-luxury categories.  In the end, it may be mandates that do the heavy lifting.  For all of the reasons above, and given Americans’ aversion to mandates, IHS Markit projects 40% of EU cars will be hybrid or pure EV by 2031, compared with 20% of the American passenger fleet.

Above and beyond the usual suspects, there’s one you might not have suspected – reliability.  At least in the US, drivers are holding onto their cars longer than ever, thanks in part to better quality.  By this July, the average age of an American car was a record 11.9 years, and per IHS, one in four cars on the road in the United States are more than 16 years old.  This is something of a tribute to improved automotive quality:  as noted in the article linked above, “Back in the ’90s, one-quarter of cars parked at the grocery store were not Ford Mavericks and Chevy Vegas. Nowadays, that beige 2002 Corolla is still ubiquitous.”

With COVID driving economic worries for consumers, auto purchases may be viewed as more discretionary than ever, particularly when it comes to buying a new car.   At the same time, until the pandemic is under control, road trips (vs. flying) and commuting by car (not public transit) may keep long-term auto demand simmering, even as our wheels continue to gray.  How all of the preceding will drive EV acceptance in the next few years is hard to forecast, but we’ll be watching closely.

Our new office will be located just west of the Bank of America at the southwest corner of 31st and Main.  Our official address will be 31 West 31st Street, Kansas City, MO  64108.  Beyond that, our contact information will remain unchanged.  And just in case you’ve had issues making contact with MEC staff in the past few days – well, now you know why. 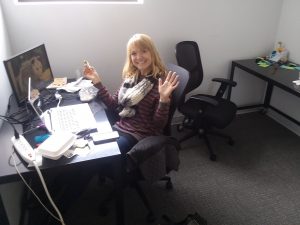 At the moment, the office is a maelstrom of boxes and cardboard and packing tape and long-forgotten teapots and scuba diving gear (no, seriously – it’s amazing what you find when you’re in the middle of moving).  And while we’ll miss our old home, we’re looking forward to a cool new location.  Fittingly enough, it’s in a building that was restored and rebuilt – just our style.

When you drop by, feel free to park in the lot immediately east of the office – just don’t park among the U-Haul trucks on the west wall of the lot.  There are spaces right in front of 31 West 31st, but it can get a bit tight backing out when leaving during rush hour.

We look forward to welcoming you to our new space, and to more great years ahead!